This two-story Victorian mansion was built in 1887 by A.M. Cole, a prominent Virginia City pharmacist.

Mr. Cole lived in the house until 1914 when it was purchased by the Crosby Company. The Crosby Company operated a large dry goods store which later branched out during the early 20th century into lumber and coal sales.

The wooden frame, hip roofstructure is a well preserved example of Virginia City’s prominent homes during this period. In 1933 Mrs. Ruth Sexsmith purchased the house and it remained in the Sexsmith family until 1978. 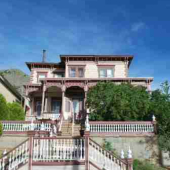