Virginia City is filled with unique and charming characteristics and even more unique and charming characters. From cowboys, women dressed in Victorian elegance and people who appear to be outlaws, you’re sure to meet some of the most fascinating folks you’ll ever come across. Walk down C Street and you’ll probably even be greeted by a gentleman and his donkey. Connor, aka PokE, and his donkey Bernadine are two of today’s “C Street Celebrities.” However, the tradition of a man and his donkey dates back to the 1950s when Virginia City went through its second Bonanza and secured its legendary status as one of the most iconic mining towns in history. 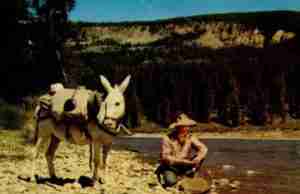 Bad Water Bill and his Faithful burro Gravel Gertie on one of their many trips through the state of Nevada – Carson Now.

Born in Wisconsin in 1912, Arnold Fryk worked in Hollywood as a stunt man before he became known as Bad Water Bill. A natural-born star, Bill often drew attention by dressing as a prospector and taking photos with the public. Bill took his talent to Virginia City in the early 1950s, where he quickly became the new town celebrity along with his new burro, Gravel Gertie. Soon, Bill and Gertie’s faces appeared everywhere throughout town, including in souvenirs, banners and even a beer bottle from the popular Bucket of Blood Saloon.

Bill, always dressed in mining garb, and his companion Gertie greeted Virginia City’s visitors daily and attended every parade in town before they became recognizable statewide. In 1955, the new Territorial Enterprise featured Bad Water Bill in a front-page story and named him Mr. Nevada for his fame throughout the state. Bad Water Bill retired in 1976 and passed away two years later.

After several years, the tradition continued with the beloved John Bouie, later known as Sweetwater, and his mule Ginny. Much like Bill, Sweetwater always rocked a full beard and mining attire as he welcomed the thousands of tourists to town. The duo regularly attended state tourism association events, traveled to California events to represent the Comstock and won contests of various sorts.

“He was a real asset to Virginia City,” said Ron Gallagher, lifelong Virginia City resident. “Sweetwater could talk to visitors for hours and happily answer any question about Comstock history.”

Sweetwater and his wife Sandy later became proprietors of the Territorial Enterprise Bookstore and Historic Center. The two retired in Silver Springs, where they now reside. 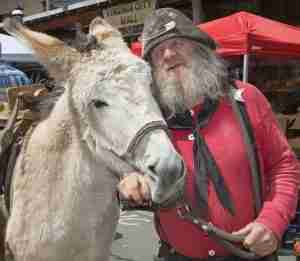 StinkE and Bernadeen posing for a photo in Virginia City – Reno Gazette Journal.

Shortly after Sweetwater and Ginny left Virginia City, StinkE and Bernadeen stepped into the C Street celebrity scene. Danny Eugene Beason, or better known as StinkE, was born in Roswell, New Mexico in 1951. Mining was in his DNA. For most of his adult life, he worked in the oil industry in Louisiana and New Mexico until he headed up to California where he met the love of his life, Bernice Beason. A few years later, the Beason family packed their bags and headed West to settle down in Gold Hill, Nevada. The two fell in love with the western mining town, so much that Danny created StinkE, his iconic Wild West persona. To show just how committed he was to his new way of life, StinkE purchased a pet donkey and named her Bernadeen, named after his wife Bernice.

In 2017, StinkE moved to Virginia City hoping for new beginnings after his beloved wife Bernice passed away. Devastated by her death, Bernadeen became StinkE’s sidekick. The two would walk around town offering photos for small donations. Soon enough, StinkE and Bernadeen became Virginia City’s new C Street celebrities known far and wide. Children would eagerly beg to pet and feed the donkey. This became StinkE’s full-time job, and he enjoyed every minute of it.

At the beginning of 2021, Danny was diagnosed with dementia and was admitted into a home. He passed away on March 2. True to his promise, his grandson Connor Nichols, who Danny raised as his own son, promised his grandfather that he’d carry on the legacy of StinkE and look after Bernadeen. 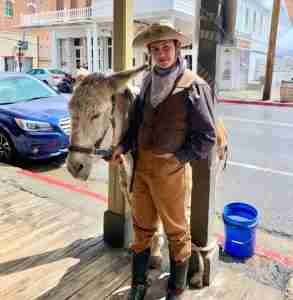 Poke poses for a photo with his grandfather’s donkey Bernadeen in Virginia City.

Now nicknamed PokE, in reference to his grandfather StinkE, Nichols took on the role his grandfather made famous as one of the town’s most recognizable goodwill ambassadors.

One thing is certain – if history holds true, the town’s character legacy is in good hands. 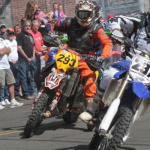 All-terrain and Off-highway Thrills Around Each Turn in Virginia City, NevadaOur Tales 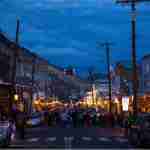 Hunt for Spirits in one of America’s Most Haunted TownsOur Tales
Join our E-news
Sign up to receive the latest news,
event information and deals before anyone else!
JOIN
X