The mill is located on F Street near the old amphitheater, where the V&T railroad tracks cross the street.

In the heyday of the Comstock, ore would be washed out from the crusher and put on a steel table, where mercury would be used to extract gold.

After the late 1880s, with many workers killed burning the mercury, Virginia City’s mills changed to a system where the gold was washed out of the ore through several screens. It then was put in a pulsation jig, trapping the larger pieces of gold. The finer ore would then be washed onto another steel table. Since gold is heavier than dirt, the dirt would just wash away and the gold would remain.

The one thing that isn’t that authentic is the smoke that comes from the boiler, it’s just there to show the visitor what it was like to work in the mill. 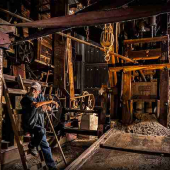