Performing arts and folklore come to life at Piper’s Opera House with an original production peppered in with some historical references of Virginia City’s scandalous past. “For the Love of a Comstock Girl,” a romantic comedy set in the 1860s, brings together four miners seeking to win the hand of the lovely Madam Julia Bulette. The original production, written and produced by Jennifer Hunt, offers two dinner performances as part of the six performance dates.

As the story goes, after a hard day, four miners all decide to embrace life and spend the night with the beautiful and famous Bulette. Unfortunately, she has plans to attend a charity event that evening. All might be lost for the poor men but Mark Twain steps in with a plan to hold a competition. Whoever can prove to the Madam they love opera the best will be her date for the show, and company for later. The four miners embark on a hilarious and heartwarming adventure to impress the notorious Comstock girl.

“The vision for this performance was to tie in our history while incorporating the stage at Piper’s Opera House into the production, as well as some of our more famous residents,” Hunt said. “I also wanted it to be engaging along with entertaining. From what we’ve heard, we nailed it.”

Piper’s Opera House, located in the historic district of Virginia City, Nev., is a living legend serving as a critical performing arts center for the region. It is listed in the League of Historic Theaters and is known for having attracted famous stars from all over the world during thelate 19th and early 20th centuries. The theater operates now as a significant, premier vintage center hosting everything from theatrical performances to concerts, family reunions and weddings.

Literally, A Ton of Testicles to Rock the ComstockOur Tales 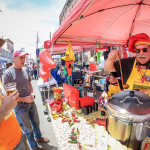