M. Vesey acquired the hotel early in the 1860’s and added the wooden structure to the original stone building.

The hotel became an important part of the now thriving metropolis of Gold Hill which was adjacent to the even larger industrial and business center known as Virginia City.  The combined population of the two towns was approaching 25,000 people and was one of the largest cities in the west, with schools, opera houses, newspapers, trains, factories, churches and all the trappings, fire departments, police forces, etc. all of this in addition to the major mining operations which were producing large amounts of silver and gold.

The mining boom continued through the 1870’s but after that it was boom and bust and the population dwindled to only a few hundred by the 1930’s.

Today, the Gold Hill Hotel is Nevada’s longest running hotel and offers a restaurant, Crown Point, and a saloon. 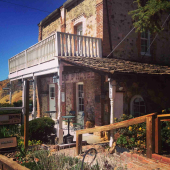