This building was shared by a number of business establishments during the 19th century including William Spencer’s Retail Liquors, Pearson and McCourt Wine, Liquor and Cigars, and the Palace Restaurant.

Around 1910, the commercial level of the building was taken over by the Gem Saloon, which closed down in 1923. The upper floor was occupied by the Independent Order of Oddfellows and continues to be used by the group as a meeting place today.

Grandma’s Fudge Factory is known far and wide for its homemade and delicious sweets and treats. 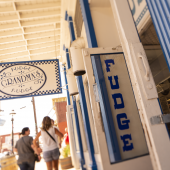