The present St. Mary’s Church is the fourth structure erected in the city by the Catholic congregation.

The former churches were all destroyed. The third was ravaged, or possibly dynamited, during the fire of October 1875. The large brick structure you see was rebuilt and dedicated in August 1877.

During the boom period of the 1870s the Catholic congregation numbered between 3,000 to 5,000 members, reflecting the size of the Irish, Mexican and Italian populations which flourished on the Comstock during those years.

Most of the interior church ornamentation and architectural features such as the rosewood balconies and stained glass windows have been removed from the building. The church continues to provide services. 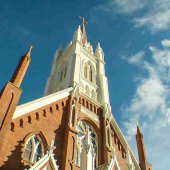