Welcome to Virginia City, home of the Comstock Lode, the 19th century mining bonanza that turned Virginia City into the most important industrial city between Denver and San Francisco, and turned destitute prospectors from all over the world into millionaires. They built mansions, hospitals, churches, opera houses and schools, and imported furniture, fashions, and entertainment from Europe and the Orient. They helped finance the Civil War, and went on to build empires around the world. Among the finest examples is San Francisco, a city built with Comstock silver.

The Ophir, Gould, Curry and Consolidated Virginia mines— those consisting of the “Big Bonanza” of 1873—brought out at least $300 million in mineral deposits and made telecommunications giant John Mackay a virtual overnight millionaire. The Comstock kings spent millions of those proceeds on Nevada’s School of Mines. In addition to Mackay, the “Bonanza Kings” included Fair, Flood and O’Brien. Other notable icons of the Comstock included engineer Adolph Sutro, banker William Sharon, entrepreneur George Hearst, and madame Julia Bulette.

While the Virginia Truckee Railroad transported bullion from the rural highlands of Virginia City to Carson City, the Territorial Enterprise, with literary whiz Mark Twain, delivered news of the day to the vibrant mining metropolis of 25,000 citizens at its peak. In 1868, Mark Twain reminisced and wrote about his journalism career in Nevada with the Virginia City Territorial Enterprise:

“To find a petrified man, or break a stranger’s leg, or cave an imaginary mine, or discover some dead Indians in a Gold Hill tunnel, or massacre a family at Dutch Nick’s, were feats and calamities that we never hesitated about devising when the public needed matters of thrilling interest for breakfast. The seemingly tranquil ENTERPRISE office was a ghastly factory of slaughter, mutilation and general destruction in those days.” —Mark Twain’s Letters from Washington, Number IX, Territorial Enterprise, March 7, 1868

The spirits of the people of the “Queen of the Comstock” still haunt the places where they lived, worked, played, learned, and died. Mining was a hard way to make a living, with 100-degree temperatures 3,000 feet down a mine shaft that required deep concentration from the person at the helm of the elevator. But the wealth of Virginia City helped finance the U.S. government during the Civil War, as attested by a museum named after General Ulysses Grant. In fact, silver from Virginia City may have helped save the Union.

Away from work, the people of the Comstock enjoyed performances at Piper’s Opera House, which still stands today as a favorite for events and weddings. The citizens also played baseball as a favorite pastime, and unwound after a long day at Virginia City’s many saloons that topped twenty-two at one point. Many attended school, with the Fourth Ward School once educating grammar and high school students. It is now considered a must stop on the driving tour of museums and attractions south of town. Virginia City comstockers are buried in the cemetery with stories told to this day, and tombstone messages reflect their unconventional lives.

The history and stories of Virginia City are as unique, rich, and colorful as the streets and buildings themselves. One visit to Virginia City and you begin to understand it’s impact and unique place in history.

“Virginia City is thrilled and gratified that our town is being awarded national recognition as a destination whose colorful, exciting history lives on for everyone to experience. We are proud to have protected the picturesque buildings and artifacts so we can offer visitors an authentic Victorian era experience in Nevada’s most famous historic mining town at little or no cost.”

Our welcome center, recently awarded the “Statewide Excellence in Grants” award, welcomes visitors with a towering headframe and historical artifacts. 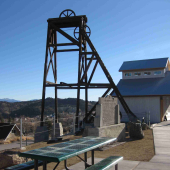